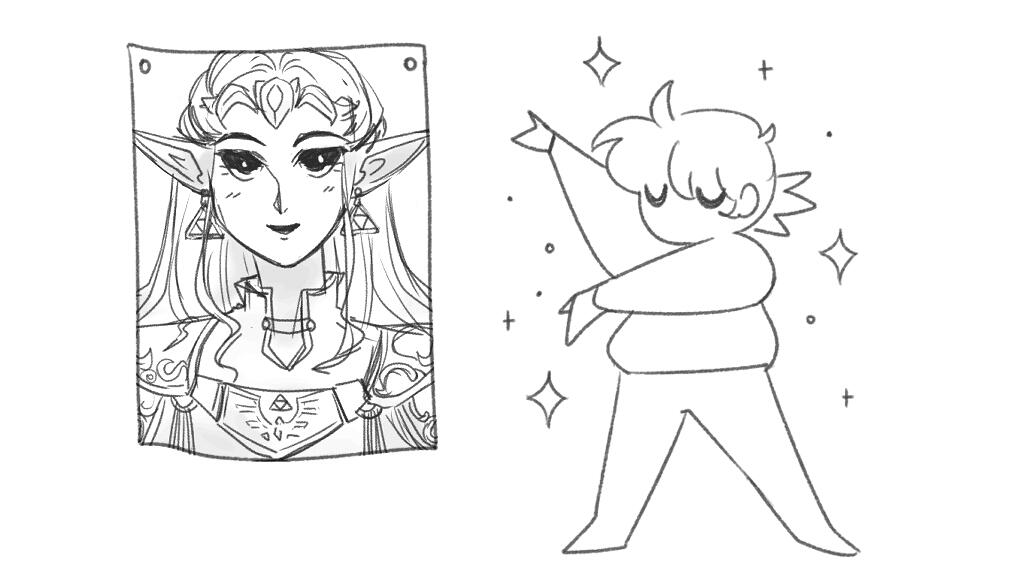 September 27th, 2022
mark your calendars, my shop will be updating with a ton of new merch on OCTOBER 10TH, 2022!July 22nd, 2022
welcome to the new doodlemancy INTERNET WEBSITE ONLINE! i switched from weebly to carrd because it was way less expensive, and carrd's web builder is less glitchy and annoying. i haven't quite finished moving everything over yet. 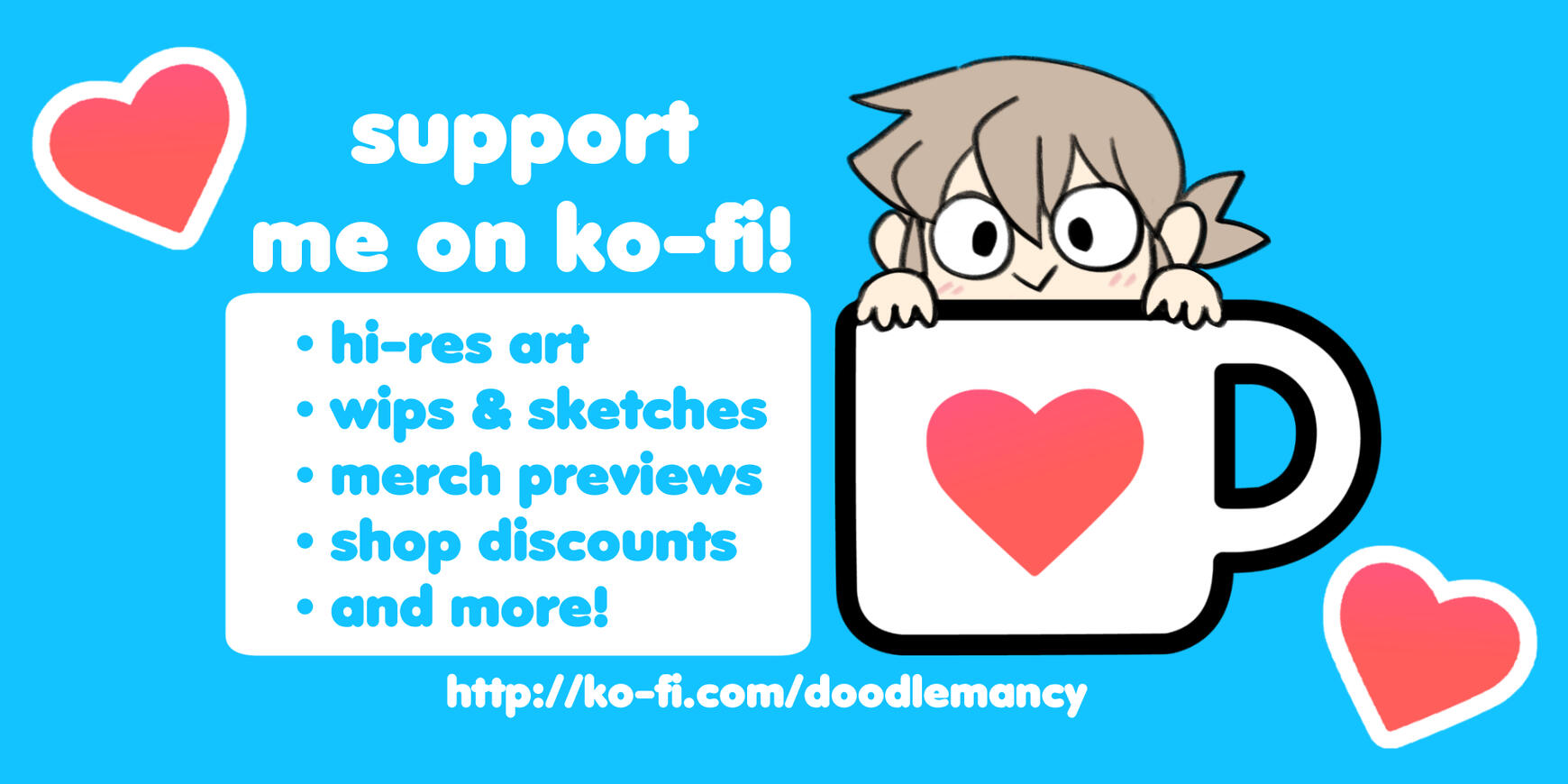 ...until my first shop anniversary!

SOCIAL MEDIA
twitter (art) - currently the most active place i post my art
twitter (bad) - for screaming. but also cat pics/videos
tumblr - fewer updates but still a good place to follow me
instagram - i hate insta but i still post my "big" stuff here
cohost - i'm still waiting to be activated but i hope it takes offVIDEO/STREAMING
twitch - i stream art or video games. sometimes.
youtube - stream archives and a few other thingsPAY ME
ko-fi - it's my patreon. except it's better than patreon.
ko-fi shop - digital goods
etsy - stickers, prints & charms
paypal - it's paypal.
throne gifts - my public wishlistOTHER THINGS
toyhouse - characters & art
anilist - my anime & manga listPLACES I EXIST BUT AM MOSTLY OR ENTIRELY INACTIVE LOL
i can be found under the username "doodlemancy" on pixiv, pillowfort, artfol, mastodon.social, pinterest, and deviantart. 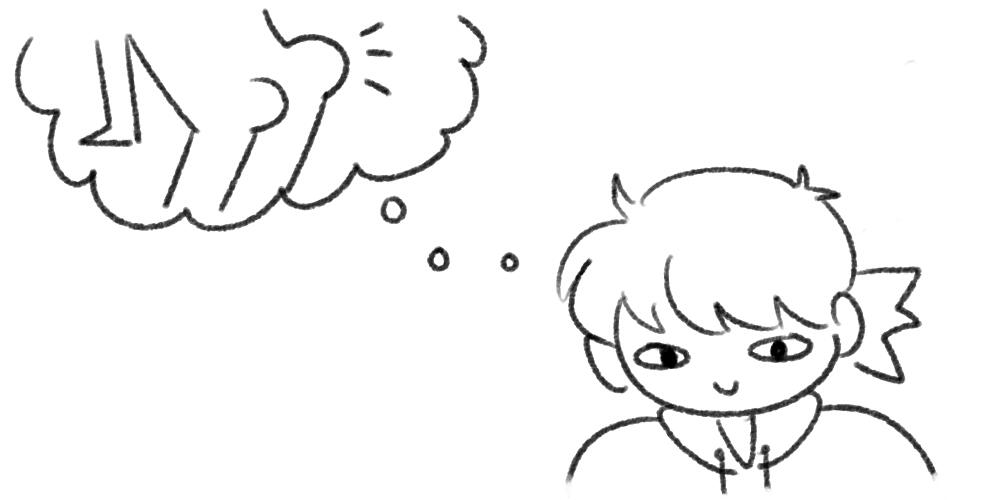 As a toddler, I once ate half a jumbo orange crayon. As a child I never believed in Santa but was fairly convinced I might be able figure out how to either float with umbrellas or slow my descent from jumps by kicking my legs like Luigi, who I had a crush on at the age of 7. If you combine my western zodiac sign with my eastern zodiac sign, I'm two sheep. My body collects chronic ailments and pains with the same enthusiasm a child in a park might collect fallen pine cones. I am disabled, but not in a way the US government cares about.I've always drawn and written stories and stuff, but I didn't get serious until I was 12 and just discovering that fan art was a thing people did and that there was a word (anime) for the specific kind of animation I was becoming very interested in. I took some figure drawing classes in community college; that's the greatest extent of my formal training. I am decidedly Not A Professional and have no intention of becoming one.I am currently living in Oregon with a chaotic neutral entity that demands to watch me shower so she can lick the water off my feet when I get out.

WHAT'S DOODLEMANCY. WHAT DOES THAT MEAN??
It’s doodle + mancy as in the suffix used to denote specialized magic (ex. pyromancy, necromancy).WILL YOU DRAW ME SOMETHING?
I am too dang busy/exhausted for requests or commissions most of the time. Sorry! Sometimes I open them on Ko-Fi, but it's like... real random.WHAT TOOLS DO YOU USE TO MAKE YOUR ART?
2012: Pencil, colored in Paint Too tool SAI with a Wacom Bamboo.
2013: Figured out how to draw with the Bamboo.
2014-19: SAI + an Intuos 4 that a friend generously passed to me.
2020-present: XP-PEN artist 15.6 and Clip Studio Paint.
I make heavy use of poseable 3D models, which I find helps my ADHD-Dyscalculia lil brain with stuff it can't otherwise process very well.

NFTs, Crypto, & Other Web3/Blockchain/Metaverse Garbage
NO.Copying & Tracing
Please don't create copies or traces of my artwork and try to pass them off as your own artwork.Personal Use
You can use my artwork as your icons/headers* on social media sites as long as you link back to me somewhere visible on your profile. You can also use my artwork as wallpapers on your devices if you'd like. Print it out and stick it up on your wall if you want, but if you have the money please do consider buying my actual prints from my shop!(*Please not drawings I did of myself though, like my comics. That's weird. That's me. You aren't me.)Sharing on Social Media
✦ Don't crop/edit out my signature, or post edits of my art.✦ Don't repost my artwork on Instagram please and thank you.✦ Pretty please try not to re-post my artwork on platforms I already exist on, because it's way more helpful to me if you share my posts instead. I've tried to make things easy via my tumblr archive/tags and my twitter moments (linked under my pinned tweet). If you can't find the thing you want, please contact me, I can find it or repost it for you.✦ If you're sharing on a platform I'm not on, share with a link back to the post/tweet/etc. you found it in or to my website. Don't just share the image. Be nice and link!✦ Please don't share my artwork in places where credit tends to go missing, ex. Facebook groups where a lot of people are reposting stuff without credit.✦ If you use Pinterest or a similar site, make sure you are DIRECTLY linking to the source of the artwork, ex. the tweet or tumblr post it's in. A lot of times it'll just pull the page number of a blog or a link to your home feed, and that won't take people to the actual source.✦ If you are a news/entertainment site and you want to put something I drew in your listicle or whatever, contact me with your generous offer of legal United States currency!✦ Do not feed my art to content aggregators, ex 9GAG, Cheezburger, FunnyJunk, and so on. If I see my artwork all crunched up with someone else's ugly logo slapped across the bottom I will flip shit I swear to god.Other Uses
My artwork is NOT public domain and it does not exist to be sliced up and redistributed as "free transparent pngs" or "clipart" or "renders". Contrary to popular belief, the phrases "fair use" and "no copyright intended", and "I found it on Google" is not an excuse, nor is "I didn't know it was yours." Purchasing physical copies of my artwork or obtaining a hi-res copy through my patreon or ko-fi also does NOT grant you any additional license to use my artwork.Why so picky? Don't you want exposure?
I love exposure! Unfortunately, reposts aren't always good for artists, even properly credited-- usually they benefit the account that does the reposting more than they help us. It's also a way that art gets further divorced from its original source. If you love an artist's work, you should show it by spreading it in the way that's most likely to get them new follows. New follows lead to more reach and more sales, which leads to more art from the artist you like! SO BE NICE. ;D

contact email: doodlemancy@gmail.com✦ commissions are closed, sorry!
✦ i can't take on long-term work right now, sorry!
✦ i AM interested in zines. tell me more babey
✦ do not email me about your NFT bullshit
✦ my SEO is fine thank you 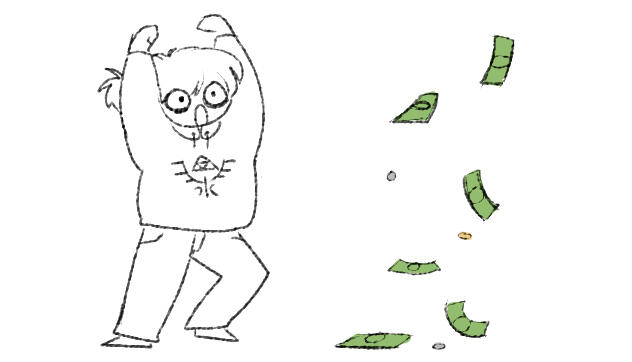 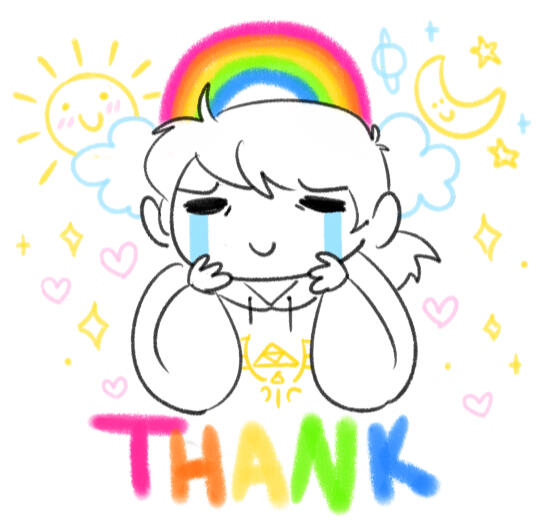 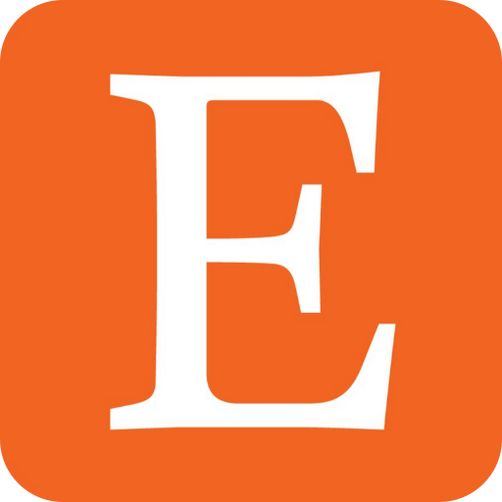 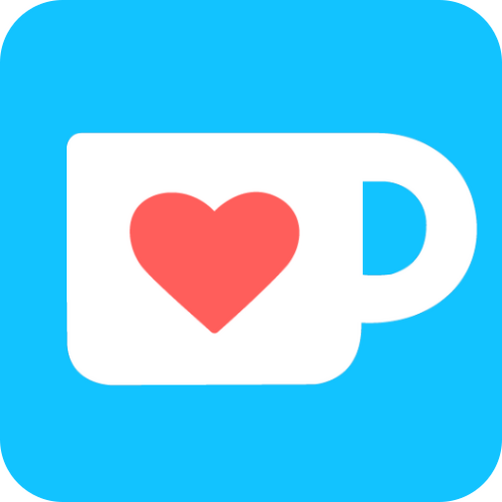 digital downloads in my ko-fi shop!

...until my first shop anniversary!

IRON COMPANY is my visual novel project in progress! 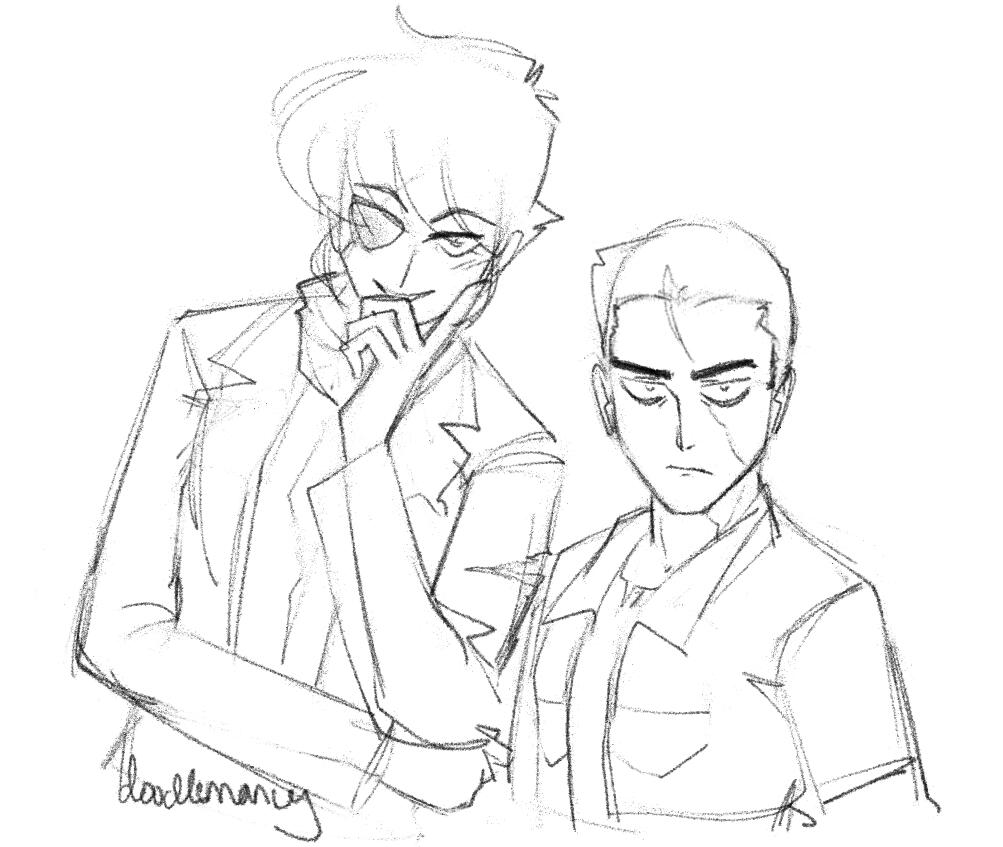 release date: MAN I HAVE ADHD IDK
platform: PC
engine: visual novel maker
genre(s): post-apocalyptic / horror / comedy / fantasy / enemies-to-friends
is there gay stuff?: you bet your sweet ass there's gay stuff.
features: text, and images that go with the text! chapters from multiple character POVs, choices that affect the story, and multiple endings. there might even be a key item.
content warnings: violence, blood, many inappropriate words, use of alcohol, mentions of suicide, and some (hopefully) frightening imagery. this story is intended for readers at least 17+. if i were the ESRB i'd rate it M, but i'm not the ESRB. 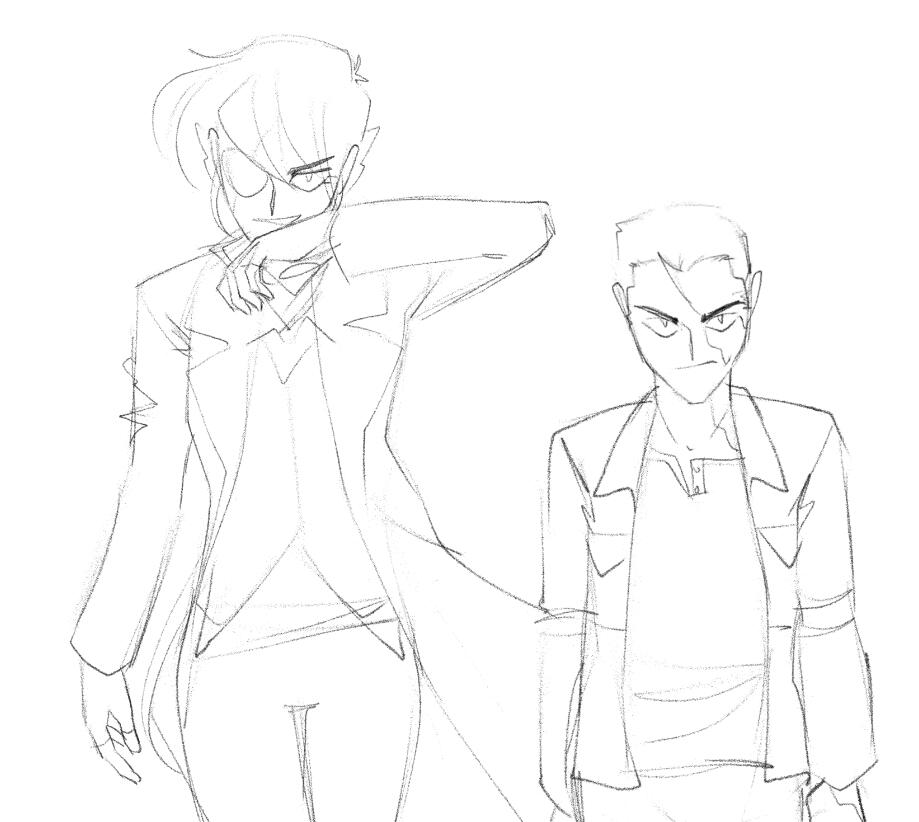 STORY
It’s been just over a century since the Rift– a cataclysmic event during which a barrier between dimensions tore open, spilling demons into the world and turning much of the planet into barren wasteland.At the climax of a desperate war for arable land, John Sykes and Petra Raskoph fought a duel to the death. Sykes stabbed Raskoph in the eye. Raskoph burned Sykes.

Dragged away to safety by their comrades, both of them survived. A year after the end of the war, they meet again by chance; Sykes, directionless and running low on cash, and Raskoph with a dangerous but lucrative job offer that neither of them can afford to turn down. 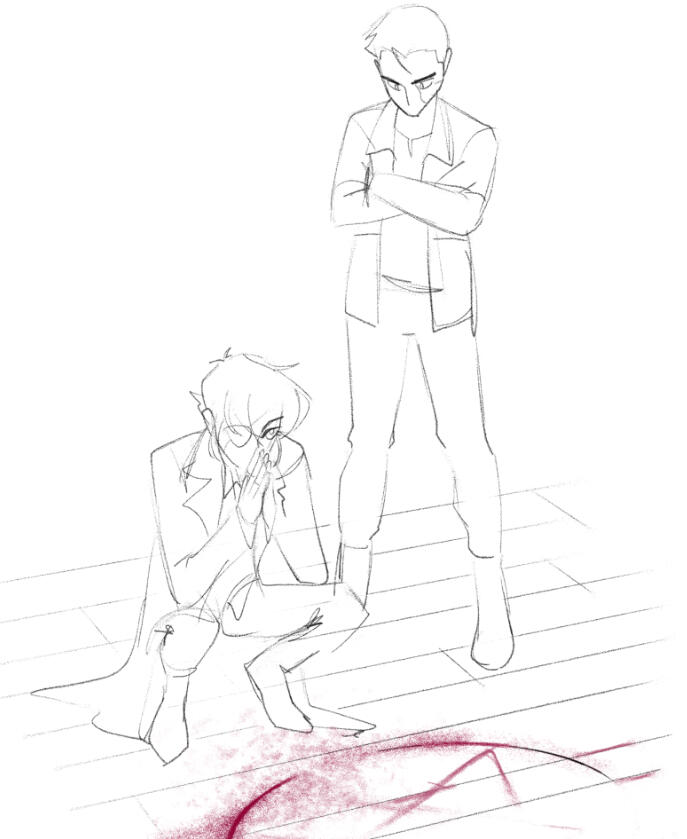 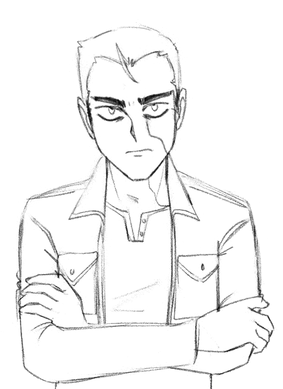 John Sykes
Age: 29
Gender: Male
Pronouns: He / Him
Height: 5 foot 6 inches (167cm)
Sexuality: Grey-AceA farmer's son, ex-soldier and all-around Practical Guy, Sykes is good with his hands and bad with people. He prefers to express himself through actions rather than too many words, and his stone-faced demeanor can be intimidating to others. Cool headed, but not entirely fearless, he likes to plan ahead rather than improvise.Something is following him. 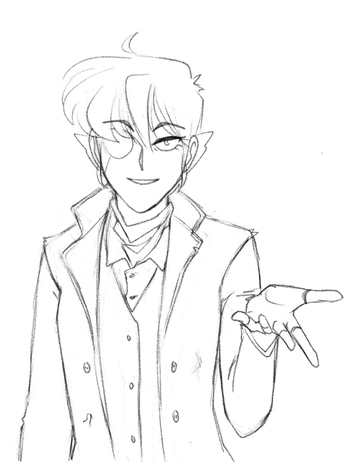 Petra Raskoph
Age: 30
Gender: Still figuring it out
Pronouns: She/Her
Height: 6 feet 1 inch (185cm)
Sexuality: Diaster PanAn ex-Inquisitor from snowy Eisenarm, Raskoph is clumsily navigating her new life as a fugitive in the Southern Territories. Anxious, excitable, and always a bit distracted, she runs on intuition and often acts brashly. She is quick both to trust and to anger. Despite her erratic nature, she seems to have a masterful command of magic, and a lot of secrets she's keeping a lid on.She has forgotten something.NON-PLAYABLE CHARACTERS 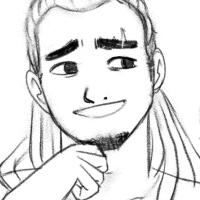 JACK CARSON
A big hug that became a person. 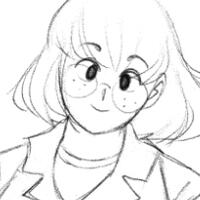 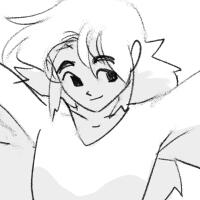 NAOMI
Friend to all birds. 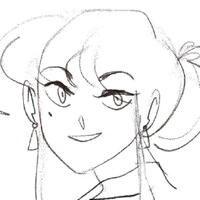 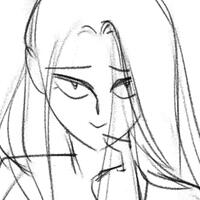 ERIKA
Talkative, for someone who's dead. 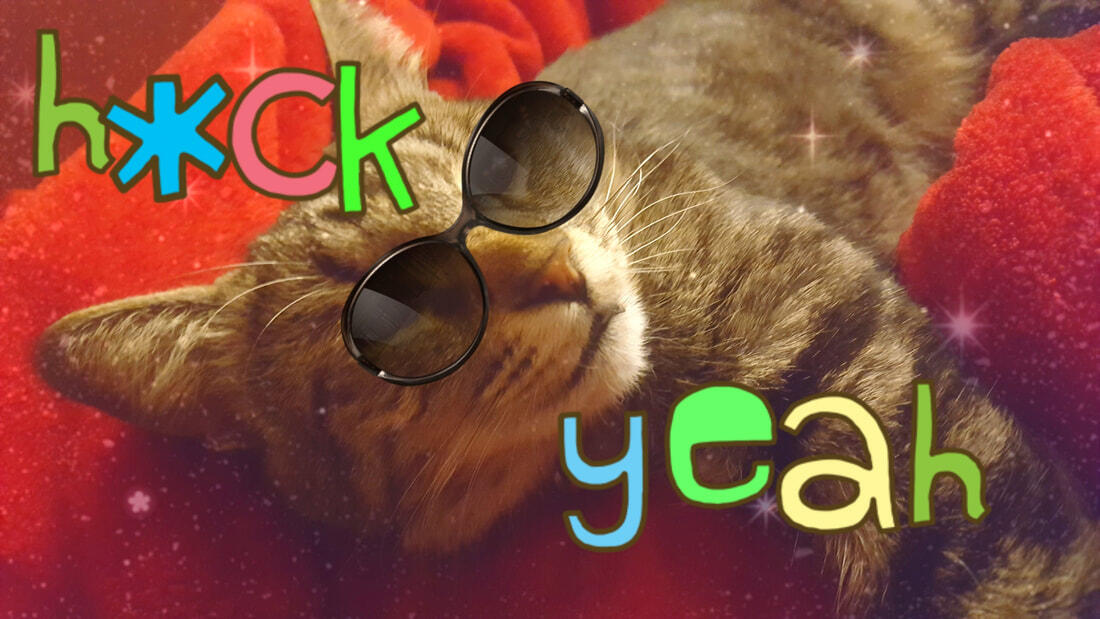 In May 2019, a licensed medical professional wrote me a letter to give to my landlord that says I need a cat for the sake of my mental health. Two days later I adopted Tia, a rescued stray who my boyfriend had bonded with through the pet store he worked at. This page is a shrine to the only antidepressant I've ever tried that didn't make me barf (although she herself is an adept barfer). I also post a lot about her on my personal twitter (if you can tolerate all the kvetching and rambling).

PREMIUM TIA FEATURES:
★ plays fetch
★ yawns with her eyes open
★ love biter
★ loves to stalk and hunt
★ criminal. disrespecter of law. based.
★ will steal your straw out of your drink.
★ gets her paws wet and puts them on you.
★ very soft
★ goes in her carrier on command (for treats)
★ fucking superb you funky little carnivore